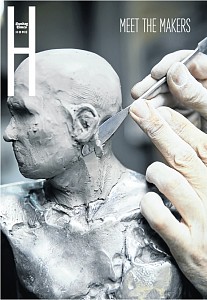 Angus Taylor and Rina Stutzer are a force in the South African art world. Not only are they both respected artists in their own right, they also run one of S A’s most advanced sculpture studios and foundries, Dionysus Sculpture Works (DSW), which casts many of our most renowned local fine artists, including Deborah Bell, Joni Brenner and Norman Catherine.

Angus has created some of SA’s most recognisable large sculptures, often combining materials such as bronze, steel and stone, although he also works with more ephemeral materials like rammed earth and packed thatching grass. H is stacked stones in the form of reclining giants evoke some of man’s most ancient interactions with Earth. Angus is probably still associated foremost with his figural work — usual ly male figures, hard to define when it comes to age or race — that engage profoundly with the tension between permanence and the transitory nature of human life. At first glance they might even appear to be made after quite a traditional idiom, but he has always subverted any notion of the monumental bronze statue by putting them in the context of ancient and, beyond that, geological timescales embodied in varieties of carefully selected stone.

Rina ’s role at DSW involves c reative input and implementing core changes on various projects, as well as work on her own large-scale public sculptural works. But she is perhaps best known as a painter. As a counterpoint to the fire, noise, h eat and primal energy at DSW, Angus and Rina ’s studio at home represents a more private, reflective space where a sense of tranquillity and connection to nature allows ideas to germinate. Their home studio is an extension of their house just outside Pretoria, designed for them by local architect Pieter Mathews (Mathews & Associates Architects) and built by Angus. The house is almost a sculpture itself, clad in granite offcuts from one of the stonemasons Angus works with. In fact, Pieter said he drew inspiration from Angus ’s sculptural works, incorporating materials that are bold, raw and honest, so that his plan and Angus’s interventions.

The internationally renowned sculptor Angus Taylor is the 2017 winner of the Helgaard Steyn Award, one of the most substantial prizes within the South African arts scene dedicated to the promotion of art and culture in South Africa. The award is made in a quadrennial cycle for best performance in literature, musical composition, painting and sculptural works. This year the Award is for approximately R575 000 and any South African born artist is eligible to enter. The prize is awarded for a work of art, in the opinion of the adjudicators, to be the most meritorious in the discipline, provided it was produced in the past four years and that the work is accessible to the South African public.