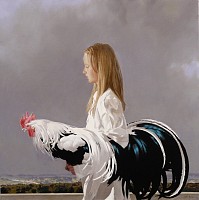 Neil Rodger was born in 1941 in Mowbray, Cape Town. The artist lived and worked in the Eastern Cape, where he thrived on the austerity and solitude of the region until he died in 2013. It seemed that this environment was conducive to the enigmatic silence so characteristic of his finest work. None of the currently favored classifications apply to his work – rather, he belongs with those individual realists who have, throughout the modern era, defied categorisation.

What he pursued is a universality, timelessness and harmony that can be found in all great art from whatever period or place. It is a measure of his conviction of the continuity of great art that he remained unmoved by revolutions, fashions or attitudes. Regular trips to Europe reinforced his cultural connections, which are to the Mediterranean by inclination and to the Netherlands by training.

His work covers an unusually wide range of content and he worked in a variety of media in both painting and sculpture. The vehicle for this content was also in a perpetual state of flux, so that ever-new perceptions were evinced, be it of the portrait, of the nude, of the landscape, of the animal painting. For this artist, the quest for refinement and distillation never ceased.

I believe that pictures rarely benefit from commentary by the artist. In general I would say that whilst most good art has been extremely difficult and taxing in the making, it is a prerequisite of great art that this is not evident – that it appears effortless or even inevitable.

Member of the selection board of the King George VI Art Gallery, Port Elizabeth

Worked and traveled in United Kingdom, Netherlands and Spain

Worked and traveled in United States of America and England

Texas, United States of America where he did some portraits