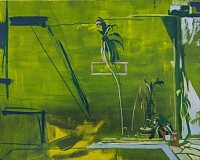 Swain Hoogervorst is based in Cape Town. He holds a Bachelor’s Degree in Arts from Vega (2010). He was selected as a top 100 finalist in the L’atelier Competition in both 2013 and 2015. Residencies include Schildersweek in the Netherlands (2013), Arteles Creative Centre in Finland (2015) and, most recently, Mas des Graviers in France (2019). Hoogervorst has participated in numerous exhibitions both nationally and internationally. His first solo exhibition Inside Out was at the AVA Gallery in Cape Town (2014). Searching Eudaimonia (2017) marked his solo debut at the Everard Read Gallery in Cape Town, followed by In Between Spaces (2020), his second solo at the Everard Read Gallery,  by whom he is represented in South Africa and London in the UK. His work can be found in private and public collections, including the Spier Arts Trust.

In the forests of the night, Everard Read, Johannesburg, South Africa

For what it’s worth, No End Contemporary, Johannesburg, South Africa

One in a Million, Salon 91, Cape Town, South Africa

Imagine the untapped talent of the subconscious, The Absa L'Atelier Award

In Finland with Swain Hoogervorst (2015)

Inside Out, an Exhibition of Paintings by Swain Hoogervorst (2014)