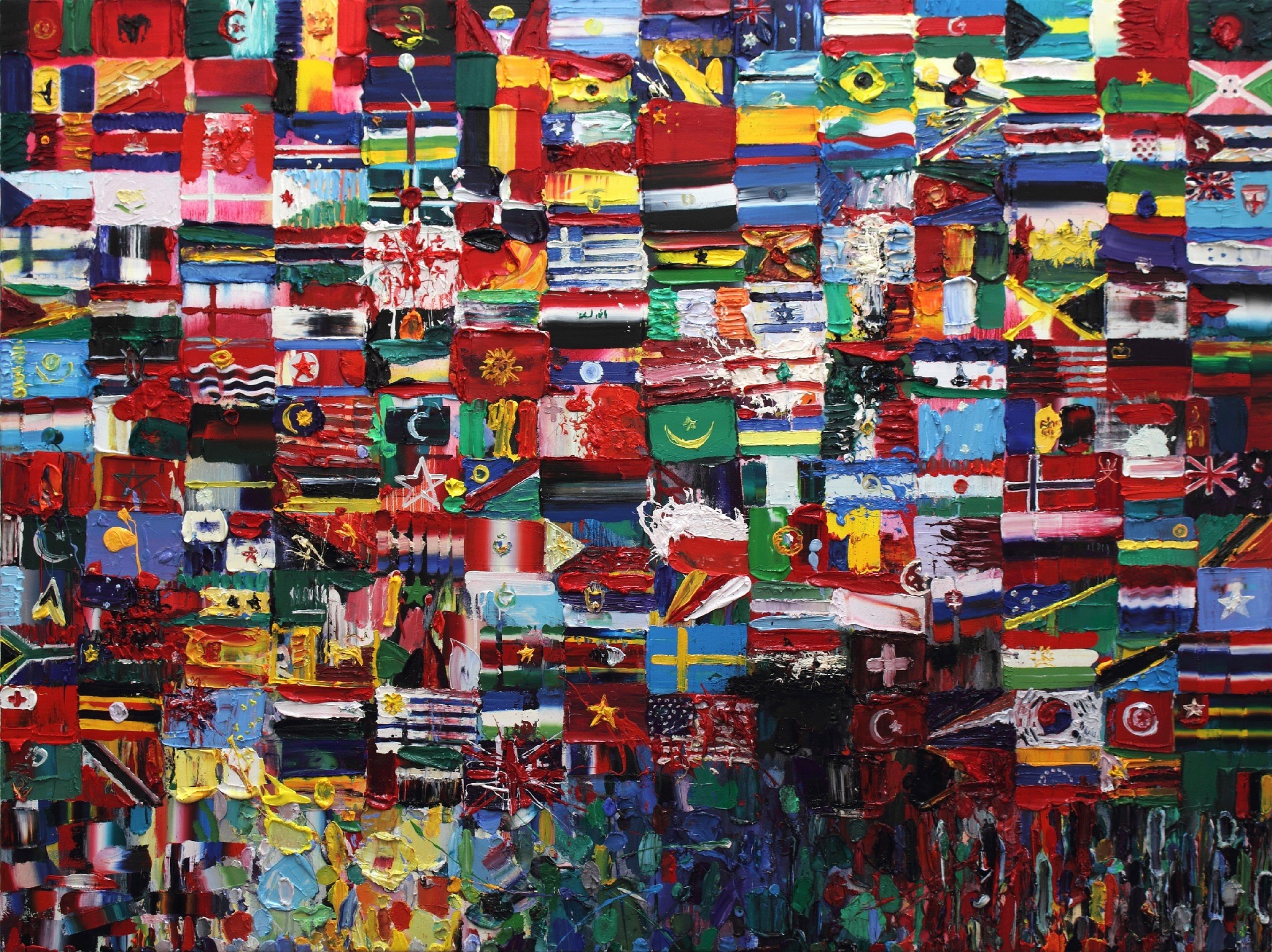 Everard Read / CIRCA is proud to present GLORIOUS ORDER a solo exhibition of new paintings by Nigel Mullins at CIRCA Cape Town. Opening the 3rd May  the artist will conduct  a walkout on Saturday 5th May at 11.00am.

In the 1980s, a phenomenon known as The Lennon Wall was created by young dissidents in Prague in the Czech Republic. Inspired by the pacifism of the musician John Lennon, they used this wall as a public pinboard for paintings and drawings and messages of frustration, hope and communal solidarity. People who contributed to this wall were described by the Communist Czech authorities of the time as mentally deranged, sociopathic agents of Western Capitalism. In 2014, The Lennon Wall, inspired by the original in Prague, was started in Hong Kong on a wall leading to the Hong Kong Central Government Offices during the Umbrella Uprising, a protest movement for democracy. The texts, mostly in Post-it notes stuck to the wall, were of solidarity, hope and love.

These walls became symbols for a crowd identity who protested the status quo, and who did so non-violently. More and more we see the power of mass gatherings of citizens in protest as a strategy to stand in opposition to the dominant power structure. Protesters share and connect and strengthen their movements through the visibility of social media, and because of this, artworks, constructions, posters and clothing (for example the pink pussy hats of the Women's Marches of 2017 in opposition to the leadership of Donald Trump) gain importance as visual symbols of solidarity and protest.

In ideological antithesis to ideas of protest are the visual symbols that are medals, badges and honours. Historically, these evolved out of feudal and imperial systems to denote rank (the amount of importance ascribed to an individual within a system and his/her amount of power over others) and dedication to the hierarchy system. Leaders were and are encrusted with medals in layers, like Post-it notes on a Lennon Wall. Medals were mostly used in military forces which came to represent nation states. They have now come to include civilian awards too: medals for bravery or for contribution to knowledge. The difference between a medal and a pink pussy hat is that the medal is bestowed upon you by an organization greater than you and a pink pussy hat is bestowed upon you by yourself, because you chose to protest against the organization.

Mullins draws from the striking visual aspects of these two antithetical relationships to power, re-describing notions of our ambiguous relationship to authority. He suggests that we are seduced by power, because it is coercive, but that at the same time we are compelled towards autonomy and equality. Traditionally, medals would be bestowed upon the recipient by an official known as The Fount of Honour, and Mullins uses the vestment of authority in a single figure to conjure aspects of this ambiguous relationship in the paintings Fount of Supreme Order and Fount of Mesmerising Endeavours (both 2018).

Most Peaceful Order of the Umbrella and Wall of Non-Hierarchical Honours (both 2018) draw from the square shapes and vibrant colours of the Post-it notes, and as the artist describes, "are painterly re-enactments of the communal creation of The Lennon Walls, a deliberately non-violent, organic, non-hierarchical accumulation of messages of peace, hope and solidarity." Medals make use of strong colour, imagery and precious metals to increase their value and we can see Mullins' translation of these visual aspects in paintings such as Plenitude and Power and For Multiple Ideal Societies (both 2018).

Extending these ideas, Mullins has also created a set of paintings as medals. He has been obsessed for many years with paintings as fetish objects and with investing the art object with talismanic qualities through the accretion of paint, a valuable and historically loaded substance. He advances this particular idea, and the idea of medal as fetish object loaded with power, by the use of copper (legally obtained). Copper, similarly to oil paint, can represent aspects of a complex relationship with the past. In itself, it suggests the exploitation of nations by other nations for their resources, and on a formal visual level the used/found tangles and structures of copper wire suggest an unravelling of past practices as well as inferring the persistence of these communal practices and habits. As the artist states: "Our ideals for the future are founded on dynamic conflict with the past."